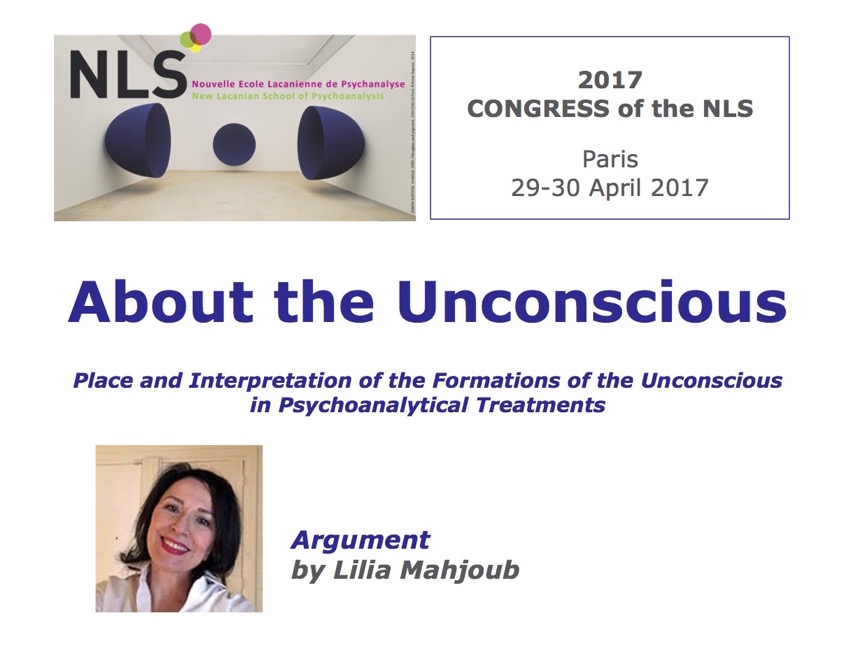 Congress of the NLS

Place and Interpretation of the Formations of the Unconscious

has very precisely this fate, that it does not reach its recipient.

How is it, then, that it expresses itself? This is

the central question of psychoanalysis.”

“We’ve always known about the unconscious”[1], said Lacan, “But”, he adds, “in psychoanalysis, the unconscious is an unconscious that thinks hard”[2]. And then – surprise! – Lacan says, “If they are thoughts, it can’t be unconscious”[3]. It is what Jacques-Alain Miller refers to as “Lacan’s Paradoxes”[4], and if Lacan said it with this apparent simplicity, it could also not be more serious for his part.

In fact, Lacan claimed to be the only one to have given full weight to what Freud aspired towards with this notion of the unconscious. In this way he did not stop questioning the status of the unconscious throughout his teaching, to the point of making it a fundamental concept. For Lacan, the matter was not closed, even if many considered it to be so at the time.

All words? Of course not, since it is a matter of reducing what is presented as a continuous torrent of words – one that psychoanalysts invite from those to whom they listen. The unconscious is not this mass of words, of signifiers, even if, at the start, Lacan proposes the aphorism that it is structured like a language.

While Freud himself approached the question of the unconscious only with reference to the play of the signifier, he made room for its specific formations: dreams, parapraxes, jokes, forgetting, even symptoms. What is striking is that these formations appear in the form of a failure, rupture, stumbling, fault, or “discovery” [trouvaille][6] – in short, a discontinuity. And it is there that Freud went in search of the unconscious.

Does this mean that this discontinuity linked to the formations of the unconscious occurs against a background of continuity? No, for Lacan points out that this would be to postulate a sort of one that is anterior to discontinuity. In 1964, when he questioned this concept of the unconscious anew, he insisted that his teaching is to put an end to the “mirage to which is attached the reference to the enveloping psyche, a sort of double of the organism in which this false unit is thought to reside”[7].

However, this mirage constantly returns. One only has to listen to what gets put about in the media to realise that this is what is generally believed. One thus hears psychoanalysts – so-called psychoanalysts – expressing themselves here, there and everywhere, who conceive of the unconscious as a closed space, indeed as an organ that must be penetrated by suggestion, giving it sense, or even, if they are so-inclined, as mapped out by cerebral imaging. In this way preference is given to matter, to the imaginary consistency, to what claims to be scientific – in other words, to what is supposedly proven.

This is far from “the one of the split, of the stroke, of rupture” [8], namely from “the one that is (…) the Un of the Unbewusste”[9], a term that designates the Freudian unconscious and that Lacan translates as “une-bévue”[10], as one-slip, a translation that makes the ambiguity between unconscious [inconscient] and unconsciousness [inconscience] disappear.

The dream constitutes a slip [une bévue], just like the other formations of the unconscious. Yet, “A dream is not ‘the unconscious’”[11], wrote Freud with regard to the dream material that the young homosexual woman brought to him in order to trick him and continue to defy her father. The desire to trick is what is realised here, not the desire to love men.

Thus, with the une-bévue that forms part of the title of his 1976-77 Seminar, L’insu-que-sait de l’une-bévue, Lacan is introducing something that goes beyond the unconscious. He had already, the year before, distinguished the Freudian unconscious from the one he elaborated with the sinthome, declaring it was “a matter of situating what the sinthome has to do with the real, the real of the unconscious, should the unconscious indeed prove to be real”. And he adds that the unconscious partakes of an equivocation between the real and the imaginary[12]. In other words, to grasp what the unconscious is, we may be obliged to pass via the symbolic but we cannot reduce it to this. And Lacan then underlines that “the use of the cut in relation to the symbolic, risks provoking, at the end of a psychoanalysis, a preference given wholly to the unconscious”[13].

Hence the notion of the hole [trou], already present in the trou-vaille, which he creates with his Borromean Knot – in other words, by knotting the symbolic, imaginary and real, without any one of the three dimensions taking on more importance than the two others. It is this hole that he maintains until the end, as in 1980 when he writes: “To elaborate the unconscious, as one does in analysis, is nothing but to produce a hole there.”[14]

But this can be forgotten. Hasn’t the unconscious already closed itself up against Freud’s message, thanks to the practice of generations of analysts who came after him, a practice that stitches up the opening of the unconscious, which, Lacan says, he never re-opens without great care?[15]

A short time ago, Jacques-Alain Miller also remarked that, “Psychoanalysts pay for their status by forgetting what creates them”[16]. And he continued, “Once they have established themselves, and at best, once they have grasped their singularity, they take the unconscious to be a matter of semblance, elaborating the unconscious not seeming for them sufficient criteria for being an analyst”[17].

President of the NLS

The pdf version of this text can be downloaded here.

[4] [TN: “Paradoxes de Lacan” is the name of the short series of French texts that the original version of Mon Enseignement (Paris, Seuil, October 2005) appears within. Jacques-Alain Miller refers to it in his preface to the French edition on p. 8.]