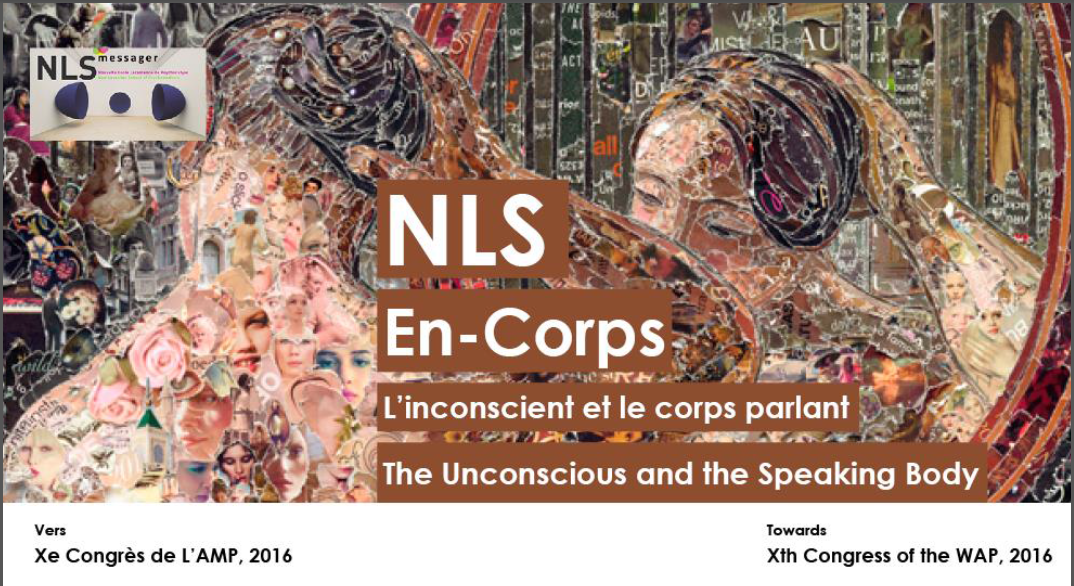 Three Mysteries of the Speaking Body

With the X AMP Congress approaching, we have read through Jacques-Alain Miller’s invitation to the theme[1]. It has echoed in our practices and debates, inspired our unconsciousness. I will now try to isolate some of the threads constitutive of the speaking body in accordance with Lacan’s proposal of the Other without Other. If the Other of the Other signifies the Other of the law, Oedipus, metalanguage, etc., the Other without Other intimates the events of the speaking body. To start with, we can say with Lacan that the primary encounter of the body and language occurs outside meaning. For this reason, such an encounter constitutes a music experience in so far as music operates outside sense. When Lacan evokes the dimension of lalangue, embroidered upon by the science of language, it is to make us hear the resonances of the body caught in the bland music outside sense.

How to map out our position in relation to the Freudian experience of the body and invention of psychoanalysis at the backdrop of Victorian morality? Freud’s master signifier, alongside the unconscious, was repression. He responded to sexuality of his day and to sexual practices, like that of coitus interruptus, and treated them as decisive in the aetiology of neuroses. Freud noted the failure at the level of coitus which opened up the field of perversions. For him sexuality was above all the feminine sexuality, terra incognita, which remained a mystery behind the echoes of the women Ancient festivals devoted to the phallus. The link of mystery and repression led Freud to reveal it as the veil, and the source of fetish, of sexuality. Today, we find ourselves at the nadir of Freud’s experience. What is this nadir?

Jacques-Alain Miller proposed that in XXI century this nadir is formed by the reversal of the Freudian position, and isolated pornography as a sign of this reversal. The spilled passion of the Freudian repression took on a form of a bespoke internet pornography available at the click of the button. Of course, the practices of πορνεἱα are not new. From the frescoes of Villa dei Misteri to the red clay Greek pottery, from the Medieval depictions of “games of love” to the Oriental imports of copulation and “sexual techniques” – this was nihil novi to Freud and Lacan. What is new in the age of internet is the fall, if not the dissolution, of the veil. It concerns us because it touches on desire, while coinciding with the decline of the Name-of-the-Father. The gradual recession of the make-belief gives us a sign of the body no longer veiled or shamed. The unveiled body without shame led Lacan to speak of the Other without Other or of the speaking body. When the king is naked he is naked, is the new rule. Shamelessness makes desire more difficult to find in analysis. Hence the call for a new term, not the body as veiled and unveiled, but the speaking one.

The vanishing of the veil, and putting the coitus on show of the screen and stage alike, points to the impossibility of symbolising the sexual relation between parlêtres. But it does not lessen the appetite. When the patients tell us about their masturbation, their cravings for more sex, eating and drinking, what do they tell us or how does the rapacious drive speak in the analysand’s body? The fugal effect of the make-belief, and the desire made ephemeral has made us more attuned – not only in the space of clinic but also in the scientific circles – to the echoes of the speaking body which by the end of the first decade of his teaching Lacan articulated around anxiety. And, what he isolated at the heart of its analysis, and what appeared to him as inseparable from anxiety, was orgasm. Whatever our initial approach, orgasm is a success to the extent that it is a successful anxiety. In fact, Lacan called it the only anxiety that is achieved [s’achève] or “concluded”[2]. Is this success an effect of the magic of the phallus that can make the body speak or of jouissance of the body beyond the phallus? Lacan located orgasm in the gap between contumescence and detumescence of the organ. What separates coital orgasm from masturbation is castration which appears as a disappearance of the phallus. Before it disappears, it is effective in directing jouissance towards the point of detumescence, which is a cut. As a realisation, orgasm is followed by anxiety, and Lacan found in it one of the mysteries of the body. Since anxiety of the speaking body starts with the opening of the mouth, it is not certain what its real culmination consists in at the other end.

Here then are the three coordinates of Lacan. First, the symbolic or the fugue of the make-belief effect concurrent with the decline and uses of the paternal metaphor, then the imaginary or the copulating bodies, and the real or the realisation of anxiety in the experience of orgasm followed by detumescence of the organ. One can reorganise these registers according to the speaking body as the impossible series of sounds of breathing, gasping, grunting, sighing, and other inarticulate rumblings that are no longer interlaced in harmony.

In the beginning – as Marie-Hélène Brousse stated at a recent talk organised jointly by the London Society of the NLS and Kingston University – the body is the image. The image of the body is the little speaking being’s first partner. For this reason, it is also the source of aggressive rivalry with the other who always usurps my place and receive favours I do not have. Lacan formulated this specular relation in his acclaimed mirror stage at the start of his teaching. One can approach Lacan’s formulation as a gift he presented to his colleagues from the IPA. Strictly speaking, mirror stage is not a psychoanalytic concept. It is an observation of an infant responding to the mirror image. The analysts around Lacan at the time put their trust in the libidinal stages, under the patronage of Abraham, as determining the natural progression of the ego till it achieves maturation. It is as if those analysts believed that each libidinal phase had a mouth of its own: “I am the oral stage”, and “I am the anal stage”, etc. Lacan’s mirror stage revealed the imaginary dimension of the body and the jouissance at play when the signifiers gather around a hole. In the end, Lacan was able to introduce the object a as external to the body but constitutive of its imaginary consistence. And this led him to lalangue and the opening of the mouth.

The exteriority of the object a that can be neither symbolised nor speak except around the hollows of the body, whether at the oral, anal or genital level, allowed Lacan to speak of anxiety as starting with the oral drive, namely from the opening of the mouth, and to place at the other end an experience of orgasm. These two poles provided a framework for the speaking body, sufficient for Lacan to speak of castration at every level, at the time he was asked about the libidinal stages by Dolto. First, castration makes its entry as a disappearance of the phallus. Then, with the parlêtre as a new organisation of the body, the castration takes on jouissance, caught up between the poles of oral drive and orgasm. What is orgasm if not a body event flanked by contumescence and ἀφανισις of an organ, whereby this “mechanism” allows to disanguish the anxiety of the speaking body and its claims to eternity?

Psychoanalysis has at its disposal different formations of the real. Freud spoke of two: the church and the army. To these Lacan added the analyst’s discourse and university. But he did not find the latter fertile and continued to reinvent the former based on the object a as being present in the room occupied by the analyst and the analysand. Jacques-Alain Miller called university “the city of ghosts”, perhaps on account of the production of anxiety that cannot be concluded. Lacan found the professor and analyst incompatible, and reserved psychoanalysis as a place of work in transference and of the pass to be achieved and shared without reference to nomination within the ranks of episteme or credo.

[1] J.-A. Miller, The unconscious and the speaking body. Introduction to the theme of the X AMP Congress in Rio de Janeiro, 2016. www.wapol.org