HELLENIC SOCIETY-NLS: Report on the Two-day Seminar in Thessaloniki 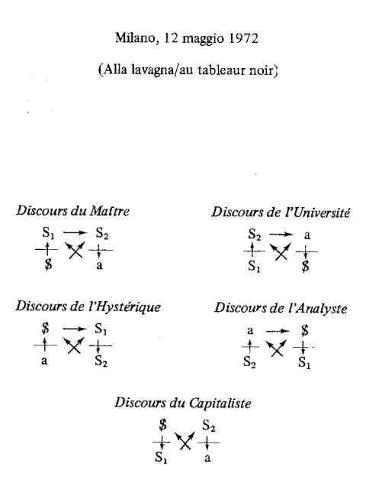 Report on the Two-day Seminar in Thessaloniki

member of the Hellenic Society

The
annual seminar of the Hellenic Society of the NLS in Thessaloniki
took place on Friday 14th and Saturday 15th December 2012 at Hippokrateion General Hospital. Our guest was psychiatrist
and psychoanalyst Valérie Pera Guillot.

During
her inaugural conference, entitled “My daughter is me”, V. Pera-Guillot presented
the extensive therapy of a woman, inviting us to construct that clinical case
under the question “whether it was possible for that woman to become detached
from a point of horror connected with devastation.” The encounter of the trauma
of sexual jouissance with the incidental, a serious car accident during her adolescence,
resulted in the emergence of obedience and guilt before her mother. That
accident constituted a punishment for the sexual jouissance she had experienced.
The relationship with her mother posed enormous problems every time she was in a
relationship with a man, while her father’s discourse, which could mark her
position, was absent. She was confronted with the impossibility of separation,
which couldn’t be thought of but with death. In front of a couple of a man with
a woman she would stand suspended.

Therapy
brought out her perpetual fight against the angst of losing the other, as well
as her dependence and hatred concerning her mother. Her daughter became the
object of her existence and through that relationship she eternalized what she
had with her own mother. Consequently, her daughter’s psychosis, the
impossibility of the separation from her and a series of incidents resulted in
the emergence of a number of bodily phenomena and an erotomaniac episode. Through
the elaboration of this case a twofold devastation emerged, concerning on the
one hand the mother-daughter relation and on the other that of woman-man. Therapy,
through the modification of the identification, would help her become separated
from her mother and make that separation not to constitute abandonment.

After
the end of the speech, the audience had the chance to pose their questions. The
story of that woman highlighted the clinical similarities and the subtle
clinical differences between the question of a hysteric woman- with regard to the
mystery of femininity- and that with which she had been confronted herself,
specifically the existence of The Woman, her mother. In addition, the reason
why supervision consists a necessity in our daily clinical practice, what does
it mean “to read a symptom” and the significance of these to the direction of
the treatment became clearer. Finally, the relation of her daughter’s psychosis
with her psychosis was discussed.

A
presentation of a clinical case, organized by Nouli Apazidou, member of the
NLS, took place on Saturday morning. The clinical interview by V. Pera-Guillot
was followed by the construction of the case. A number of issues were discussed,
such as the distinction of paranoia from schizophrenia, and the status of
bodily phenomena, love and transference in psychosis. At the same time, the
participants focused on some of the patient’s experiences and argued on how the
manifestation of obsessive compulsive symptoms –according to DSM- prevented him
from becoming delusional. Furthermore, the transition from these symptoms to
his personal symptomatic invention was examined, featuring its use for the
psychotic subject in relation to an impossible separation.

During
the afternoon session, V. Pera-Guillot combined in a unique way the “radical
belief in the symptom” with “the Geek
era”, referring to the topics of the next NLS congress.
In particular, she distinguished faith from fundamental faithlessness and
through the four discourses she elaborated on the effects that the capitalist’s
discourse brings, according to Lacan’s speech in Milan, in 1972.

The
capitalist’s discourse concerns everyone and disorganizes all the other
established discourses. According to Eric Laurent, it is the discourse that
“gnaws away at each of them”. What it introduces is a gap, a discontinuity
between S1→S2. As a consequence, the object a
occupies a new position and its production is not the effect of the signifying
chain and process. Thus, there is no relation between cause and effect. In such
a way, we can witness the transition from the primacy of S1→S2 to the primacy of
jouissance and the non-rapport. From this perspective, this also provides the
formula of the final rupture with the era in which the signifier organized the
world.

Subsequently,
V. Pera-Guillot discussed the subject Steve Jobs, whose subjective inventions
contributed to the foundation of the Geek era. Based on his biography, written
by Walter Isaacson, V. Pera-Guillot elaborated on the model of paranoiac
invention, which we encounter when we study Jobs’ case, and –following Lacan-
she suggested focusing on the way in which the desire of his mother and father
was presented to him and how they offered him knowledge, jouissance and the
object a. From this point of view, his personal experiences and life events
were the objects of the analysis presented to us.

Steve Jobs was a gifted man who remained in
touch with his spiritual aspect, while he had an activity in society, managing
to bear on the social bond. Moreover, he acknowledged that his wife was the one
who prevented him from becoming half-mad. Founding Apple was his crusade
against the evil forces –his competitors- in order to save creativity. In this
respect, as the guarantor of this creativity, he shared his delusional
construction with other geeks who joined him, in order to educate the masses to
a new universal aesthetic, on condition that he would control the freedom of his
products’ users. In this case, we witness the encounter of a genius with the
capitalist’s discourse.

The
questions posed by the audience gave Valérie Pera-Guillot the chance to clarify
some issues concerning the unfaithfulness/certainty of the psychotic subject. Concerning
Jobs, a number of specific life events were discussed in relation to his
invention, his master signifiers and the traumatic encounter of language with
the body. Finally, the audience’s attention was attracted by Guillot’s
reference to the capitalist’s discourse.

We
would like to thank very much indeed Valérie Pera-Guillot for this fruitful two-day
seminar and for her contribution to the transmission of the Lacanian clinic in
Thessaloniki. It goes without saying that her remarks and directions gave us
all a quite useful compass to prepare our work for the upcoming NLS Congress in
Athens.