NLS Congress – What Veronique Voruz thinks about it 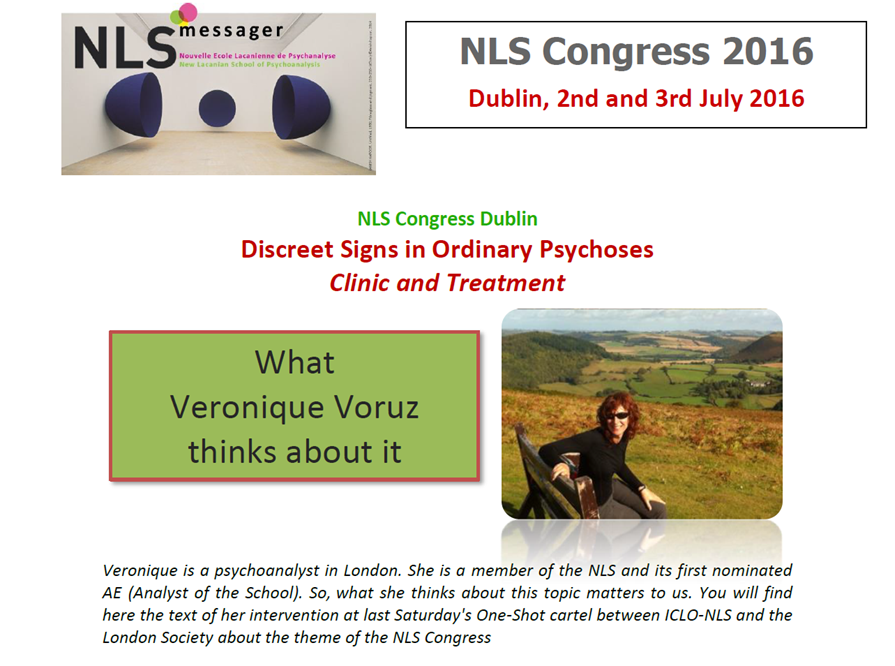 In
his closing address at the NLS Congress in Tel Aviv, Psychosis, or Radical Belief in the
Symptom[i],
Éric Laurent poses the necessity for psychoanalysis to invent other ways to
speak of psychosis in light of the generalization of the psychotic effort to
all. As an effect of this generalization, he says that: “the day will likely
come when the word ‘psychosis’ will be so out of sync with the spirit of the
times that instead we will be speaking in terms of ordinary delusions”.[ii]
In other words, psychoanalytic theory will increasingly be moving towards a continuist clinical approach – as Yves
Vanderveken outlined in his intervention towards the next NLS Congress last
month here in London.[iii]

In
this brief intervention, I wanted to speak about the second paternal metaphor
because I think that if, in his 2012 paper, Laurent re-introduced this concept,
formalised by Jacques-Alain Miller in his 1985-6 course Extimité, it is so that we may use it to
support our effort to move towards the continuist clinical approach on our
horizon. But before, I would like to make a few clarifications.

It
is the effort that we each have to make to treat the drive and phenomena of
jouissance beyond what is ready-made for this purpose in civilisation. Such
treatment can take place either by making use of the Name-of-the-Father or
through the symptom: repression or formal envelope.

The
curbing of jouissance is what is at stake in civilization – to the extent that
humanity can be defined as a conflict
between jouissance and the law[iv]
– but our civilization is prey to the paradoxical logic of the superego. A
central working hypothesis in our orientation is that the incitement to
jouissance characteristic of the capitalist discourse, a discourse in which the
only universal identification available is that of consumer[v],
has for correlate addiction as a mode of relation between a subject and any
object (x): addiction is a mode of relation between subject and object specific
to our times, to the extent that it refers to the generalized inability for a
subject to not consume a given object (x).[vi]
The rise of addiction as the main contemporary form of the symptom has to be
correlated to the dissolution of the bond between S and s, which has been commented by Miller
and Laurent in many places.[vii]
The effect of this dissolution is the weakening efficacy of truth in treating
the real.

These
two elements constitute the background for our clinical work: addiction as a
mode of relation between $ and a, and
the averred status of all discourses as semblant, with the disorientation that
ensues.

Adjusting
the theory of our praxis

So
we need to adjust our theoretical apparatus for two reasons.

The
treatment of jouissance by language

Central
to the question of the subject’s treatment of jouissance is Lacan’s invention of
the paternal metaphor, which refers to the metaphorisation of jouissance by the
Other of the signifier, and so to its transformation into desire. We could think
that the paternal metaphor is a concept that belongs to the binary clinic
Neurosis/Psychosis because it is Lacan’s formalization of the Freudian invention
of the Oedipus complex, and that it should therefore be of the past. Or we could
take Jacques-Alain Miller’s lead in his text on the speaking body[xi],
and work with the idea that concepts need to be constantly woven anew in
psychoanalytic theory (this is Miller’s own choice: to metaphorise the term unconscious by that of speaking body). And so with the paternal
metaphor: the concept can be actualized and be used in the continuist perspective. Thus in Psychosis, or Radical Belief in the Symptom,
Éric Laurent proposes a simplified formulation of the second paternal
metaphor, developed by Jacques-Alain Miller in Extimité. Miller’s argument in Extimité in complex and I haven’t had
the time to work through it sufficiently for today but I hope we can place it on
our agenda for the Congress. I will just say a few words to open up the
question.

The
first paternal metaphor: the historical step of monotheism

In
Extimité Jacques-Alain Miller is
trying to articulate jouissance with the Other of the signifier. For this
purpose, the paternal metaphor is obviously a crucial concept. Addressing the
question of what of Judaism is present in Freud, Miller specifies that it is not
the father, but the function of the
father, which is present in both Freud and Judaism. Miller historicizes the
emergence of this function with regards to religion: “the emergence of paternal
monotheism consumed the great maternal religion”.[xii]
Here he is referring to the prohibition by the Jewish religion of the orgies and
sexual rites that were practiced in order to access the divine by polytheistic
religions, as a way of establishing the existence of the Other as Other of
jouissance. By extension, “what Lacan called the paternal metaphor is exactly
that: the Name-of-the-Father coming to metaphorise the desire of the Mother.”
Implicit in Jacques-Alain Miller’s elaboration of the “historical step of
monotheism” is the double status of the Other. The Other of the signifier
metaphorises the Other of jouissance, and orders it by means of the phallus.
This is the formula of the first paternal metaphor as we know it:

To
put it more structurally, the paternal metaphor allows language “to house the
phenomena of jouissance”[xiii]
– this is written by Laurent A over J – by localising jouissance in the body,
delineating phallic zones. In this perspective, what we call psychosis is the
failure of language to do so: there is, then, a delocalization of jouissance to
non-phallic zones.

[iii]
“Towards a Generalisation of
the Clinic of Discreet Signs”, published in NLS-Messager 1779.

As argued by Marie-Hélène Brousse in her introduction to issue 88 of La Cause du désir, http://addicta.org/2015/02/27/marie-helene-brousse-parle-de-lexperience-des-addicts/

[xv]
Miller takes the second paternal metaphor from Lacan’s “Subversion of the
Subject”.

Payment can be
made in three ways:

2 – Payment by
bank transfer (from EU countries only)

3 – Payment by
cheque (French cheques only).

Payable to the
NLS and sent to Lynn Gaillard, 333 rue de la Vie