Other Voices, Autism in London

Revue of the London Society of the New Lacanian School

‘Other Voices – A Different Outlook on Autism’

A film by Ivan Ruiz 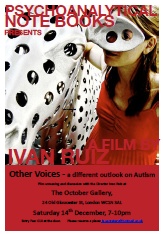 The question of autism in the UK has traditionally been situated within the clinical field of learning difficulties.  Autism has thus been considered primarily as a developmental disorder, assessed in terms of failure to achieve expected developmental milestones.  Treatments offered then tend to be programmes of re-education aimed at making up for these supposed deficiencies.

Clinical approaches to autism inspired by the work of French psychoanalyst Jacques Lacan emphasize instead the primacy of the speaking subject.  Like all of us, the autistic subject is a subject situated in the field of language.  Foregrounding the speaking subject allows Lacanian psychoanalysis to consider autism as a subjective choice, as a particular way of being in the world.  The symptomatic presentation associated with autism is then considered in terms of the functional elements that the subject makes use of in order to manage his or her experience of insertion in a world perceived as hostile, threatening or unmanageable.

This approach can perhaps be briefly summed up in the notion of listening to autism.  Rather than setting out to cure autism, to master the problem of autism, perhaps we would do better to ask whether there is something that we can all learn from autism, something that we struggle to hear, but which concerns each one of us, whether as parents, as clinical practitioners, or simply as human subjects each struggling to do the best we can with the world we find ourselves in.

Spanish film maker Ivan Ruiz will be at the October Gallery in December to present his new film Other Voices – A Different Outlook on Autism.  This is a film inspired by personal experience of autism as well as by his engagement with Lacanian psychoanalysis.  In this film he has taken on the challenge of listening to autism and of finding ways to convey something about the message at stake to a wider audience.  Ivan will be available after the screening to answer your questions and to say something about what he discovered along the way.

By bringing to us the testimony of these other voices, this film thus addresses each one of us with a unique challenge.  Are we ready to hear what it is that autism might be trying to say to us and learn a little bit about what it might have to teach us?

Places are limited so please reserve your place in advance by contacting the Secretary of the London Society of the New Lacanian School: ls-secretary@hotmail.co.uk