In her opening address, the Chair of ICLO-NLS Florencia F.C. Shanahan welcomed all attendees and introduced Patrick Monribot from Bordeaux who was presenting to us for the first time. Patrick is a Psychoanalyst and Psychiatrist. He is also an analyst member of L’Ecole de la Cause Freudian and the WorldAssociation of Psychoanalysis (WAP). He teaches in many different clinical sections of the WAPand many different countries including Italy, Spain, and of course France.

It was reiterated that we were delighted to host the event and Patrick was thanked for traveling to Ireland in order to speak to us on: ”‘There is no Sexual Relation‘ What Does it Mean? Clinical Consequences of Lacan’s Formulae of Sexuation”. He began by situating our reading as follows: Lacan presented the formulae of sexuation in march 1973 in chapter seven of seminar XX Encore (seen here below) which Patrick urged must be read in conjunction with two other previous writings from Ecrits.The first is The Signification of the Phallus” (1958) and the second is Guiding Remarks for a Convention of Female Sexuality” (1960).

Patrick clarified the meaning of Lacan’s celebrated phrases regarding the modalities of the ‘there is not’; la femme n’existe pas  “the woman, does not exist” that is to sayTHE woman, the universal woman does not exist (as indicated as La barred in the schema)  & il n’y a pas de rapport sexuel  “there is no sexual relation” in the sense that the sexual relation does not cease not to be written, as Lacan states in chapter three.The sexual relation is impossible in terms of writing – nothing allows for a ciphering that would connect the two sexes. Indeed, in 1894 Freud indicated that sexuality produced a “hole” in the psychical apparatus. In Patrick’s words this is because “the sexual relation is a pure real” and is thus irreconcilable with our subjectivity.

This non-relation is not new in Lacan who had already evoked the false evidence for the sexual act in his seminar Logic of the Fantasy onApril 12th of 1967 and returned to this topic in the seminar From an Other to the other and also in Television. However the seminar Encore is a breakthrough in the topic: the formulae of sexuation are mathemes that write the separation between feminine and masculine positions. Ultimately, it is a writing about the impossibility of writing the sexual relation at the level of structure.

Patrick elaborated much further with logical and technical eloquence but to keep this review within reasonable limits we shall leave the tracing of the talk here and simply say that the concept is evoked beautifully in the myth ofAristophanes which can be found in Plato’s symposium; that is that man and woman once existed undivided as one creature with four arms and four legs with a head of two faces but Zeus fearing their power split humanity into their respective sexes and ever since we have been doomed to search for our missing other half.

The presentation was accessible and revealing yet so stimulating that we ran over time, though the attention of the audience never faltered. One could sense that there were questions and comments buzzing in everyone’s thoughts pitted against restraint out of consideration not to hold up our guest or those whom might have other engagements afterwards.

Quite a feat laying bare a picture of Lacan’s formulae of sexuation with such clarity, precision, and high resolution balanced against such a close reading of the surrounding texts. We sincerely look forward to Patrick’s next visit. 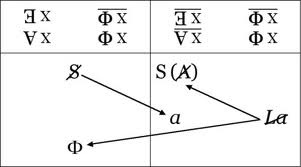