Report on the London Society Study-Day

The Facets of Jealousy 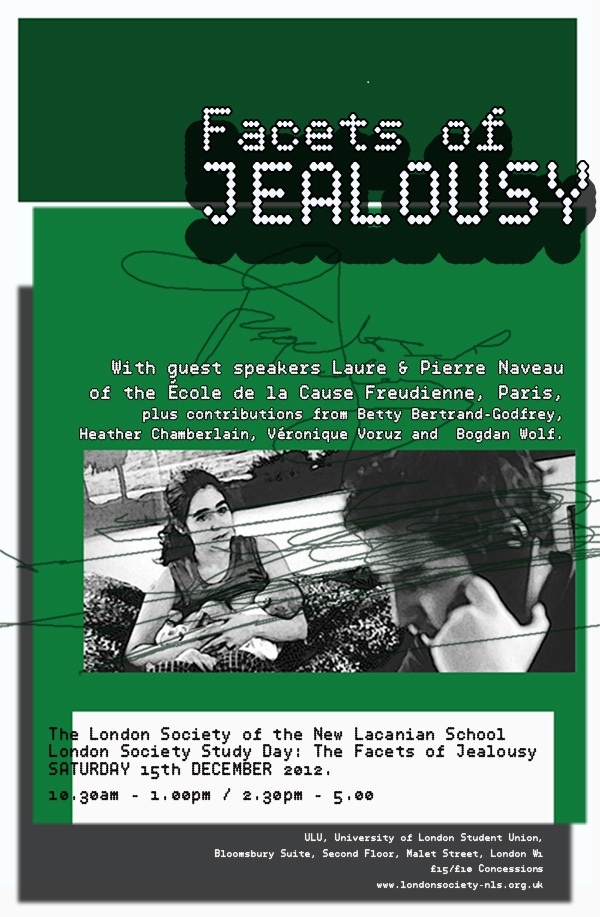 The London Society and its guests congregated to consider the “The Facets of Jealousy”, to pay attention to this every-day phenomenon, that finds the subject snared in relation to his/her object and their place vis a vis the Other. The question is begged, ‘how do we approach this intimate suffering – this state of exile in which the subject finds themselves aside that which is most precious to him/her?’

The day afforded an extended moment to pore over discreet details of the irruption of jealousy from several perspectives; returning again and again to minutiae emerging in clinical sessions and subtleties long inscribed in literary treatments of its pathoi. This made for a delicately nuanced and poignant encounter while, at the same time, effecting a sustained exercise: the triggering of effort in the construction and consideration of hypotheses built on the arrangements of clues offered, with careful attention to their time, locus and interplay with a myriad of elliptical dimensions.

Veronique Voruz’s ‘Reading Catherine M. on Jealousy’, references the extraordinary material published in two books by Catherine Millet (The Sexual Life of Catherine M., and Jealousy: The Other Life of Catherine M ) and in a public conversation that took place in Brussels in May 2012 between the author and Marie-Hélène Brousse. The enigma turns on ‘this woman, who accepted no limits on her own sexual freedom, and derived great pride from her ability to be completely sexually liberated, something which gave her something of a position of exception for men, the fact that her chosen partner of love (the man of her life) could desire other women was a source of unspeakable suffering’.

The apparent contradiction of these two facets of the life of Catherine M, yields nuances to the careful attention of the Lacanian orientation: how a particular subject strives to work a singular solution to the sexual relation that does not exist; using her body images she stages a Trompe-l’œil to render herself inviolable by impossible reals associated with speech and the social bond. Veronique Voruz reports how in her exchanges with Catherine Millet, “Marie- Hélène Brousse opposes relation and bond, stating that if the relation is possible, then there is no need for the bond, ie discourse.”

Bogdan Wolf posed the intricacies of the gaze in his paper: Love, Jealousy, Envy and Shame.

While noting that Freud’s own position was that the penis envy marks for a woman her position at the end of analysis, Bogdan Wolf noted that, “It is with the entry of the object onto the scene of jealousy that I want to move further towards what is called envy. Jealousy, the ‘passion of jealousy’, is linked to desire of the one who is the third one. But, discerns from various accounts “the object in the visual field…lurking behind the scenes of jealousy/love relations. He goes on to say that, “If jealousy concerns desire, envy is linked to jouissance.” Further, that, “Lacan makes a distinction between jealousy and envy, relating the latter to the gaze. In what way? In envy the subject encounters an object that is useless for the subject because it concerns possessions.”

Bogdan Wolf asks, “Where does Lacan seek the causes of envy? If I envy the Other, it is because I assume the Other to be in possession of the object that makes him or her jouir, the agalmatic object. And by this stroke I touch, Lacan says, on the image of completeness [l’image d’une completude]. When confronted with the image of the one who has the agalmatic object, the subject goes pale before this image – palir – which implies some form of recession or I would say numbing, which also happens in shame.”

In speaking regarding The Other Man of her Life, Laure Naveau “elucidates what is at stake in the case of a young man who presented himself to (her) as being in the grip of a struggle between two passions: his oral object of addiction (in the form of various alcoholic drinks) and his feminine ideal, the woman of his dreams.”

Laure Naveau discerns how “(o)n the other side, there is a non-sexual choice, a choice for the a-sexuated, the a-sexué of jouissance in the form of an oral object of pleasure, where the substitutive satisfactions it gives rise to create an impasse to the Other and ensures that a kind of sexual peace reigns. Further, “because of the difficulty he had in holding the body of his sweetheart close, chose to make a body with the bottle, to the point of incorporating it.” She worked steadily to bring “to light the structure of the passage to the act in relation to the affect of jealousy that such a substitution entails.” In turn, through the course of his treatment the subject “comes to ask himself how he can stop being both the director and spectator of a scene that ravages and ravishes him, in order to be finally the actor of his life.”

The afternoons proceedings opened with Pierre Naveau speaking on ‘Jealousy and the Hidden Gaze’, wherein he explored several hypotheses beginning with the idea “that the hidden gaze is the drive element that acts as the source of jealousy.” He develops this by tracing a “link between jealousy, the hidden gaze and knowledge,” siting Sartre, Proust and James Joyce’s Exiles. For the jealous man, he says, “there is a hole in knowledge…(he) doesn’t know the woman who forms the object of his jealousy and that, in the end, she remains a mystery and utterly escapes him.” He adds that, “Exile, says Lacan, is the appropriate term to express the non-sexual relation…his soul is wounded by doubt. He wants to know everything; yet, it is impossible to know everything.”

This gap in knowledge is also present in Marguerite Duras’ novel the ravishing of Lol V Stein, this time played out in a feminine subject. Watching as “a hidden gaze behind a hedge of plants”, Lol is ‘carried away’ by the ravishing display of the inseparable dancing couple, Michael Richardson and Anne Marie Stretter (‘the woman with the non-look’). “The fantasy of being-three”, Pierre Naveau proposes, “is the name Lacan gives to this type of jealousy that characterises Lol’s subjective position from this moment forth”.

With concluding references to Catherine Millet, Pierre Naveau proposes that there is “no such thing as jealousy but there are singular jealousies and, above all, that the meaning of the word jealousy is manifold. This meaning, in each case, must be reconstructed…A difference thus appears between masculine jealousy and feminine jealousy on the one hand and Freudian jealousy and Lacanian jealousy on the other. Freudian jealousy places the emphasis on projection: the jealous subject accuses the other of cheating inasmuch as, if not in act, at least in thoughts, he is himself unfaithful. Lacanian jealousy refers to the knot of subjective implication: the jealous woman for example wants to be part of it and refuses to be excluded and to be left alone. This is why the hypothesis explored in this paper is that the passion for being-three constitutes one of the symptomatic varieties of Lacanian jealousy.

Heather Chamberlain presented a case, posing the question: How do we work with a jealous patient? Among the valuable elements that will remain discreet, was offered a clear demonstration of how an utterance from the Other of the transference “You always have to…” lends itself to be heard by the subject of the unconscious as an imperative propelling their compulsion to repeat.

Betty Bertrand-Godfrey presented “A Case of Masculine Jealousy as a Name of the Father?” with reference to Freud’s 1922 paper, ‘Jealousy, Paranoia and Homosexuality’, where Freud distinguishes 3 types of jealousy (normal, projective and delusional).  Betty Bertrand-Godfrey also brought to our attention that this text is the only one from Freud that Lacan translated into French.

Normal jealousy, arises from the Oedipus complex and relates to sibling rivalry, whereby the subject believes that he has lost the loved object and has hostile feelings towards the ‘successful rival’ (Stratchey’s translation of Freud) a term translated by Lacan as ‘preferred’ [préféré] . This leads Freud to postulate that homosexual feelings are at stake in jealousy.

Projective jealousy is exemplified by the jealous spouse, unable to recognise their own desire for infidelity, is projecting it on to the other. Freud gives an indication for the treatment of these sort of cases: ‘in the treatment of a jealous person like this, one must refrain from disputing with him the material of which he bases his suspicions; one can only aim to regard the matter in a different light’. He then goes on saying that this type of jealousy is already almost delusional, hence his indication regarding the direction of the treatment. This indication has been a thread for her work with the subject of this particular case.

The third level of jealousy is veritably delusional and is the result of ‘homosexuality turned sour’ and of the fantasy ‘I don’t love him, she loves him’ a version of ‘I don’t love him, I hate him’, as elaborated in the case of President Schreber.

In turn, Lacan, for example in Seminar XX, provides us with a useful reading of what needs to be in place between a man and a woman to make do with the lack of sexual relations, that is to say love. By maintaining a constant threat, be it a rival for his women or violent men who can potentially attack him, the patient invents and maintain the existence of an all-enjoying masculine double in place of his own castration. His jealousy, a call to the father, is thus an attempt to cover the lack.”

For this reporter, the day of work reaffirmed one of the signatures of Lacan’s orienting labours in which we find ourselves perennially accompanied: the ongoing cultivation of dexterity with which to respond to anguish and to deal with the lacks of knowledge. If the compulsion to repeat constitutes the symptom, the shift in accent that comes to be afforded by the sinthome permits the difference that allows the again and again to become each time an event anew.