The Poster of the NLS Congress: The Artist Miltos Manetas, “The El Greco of the Geeks” 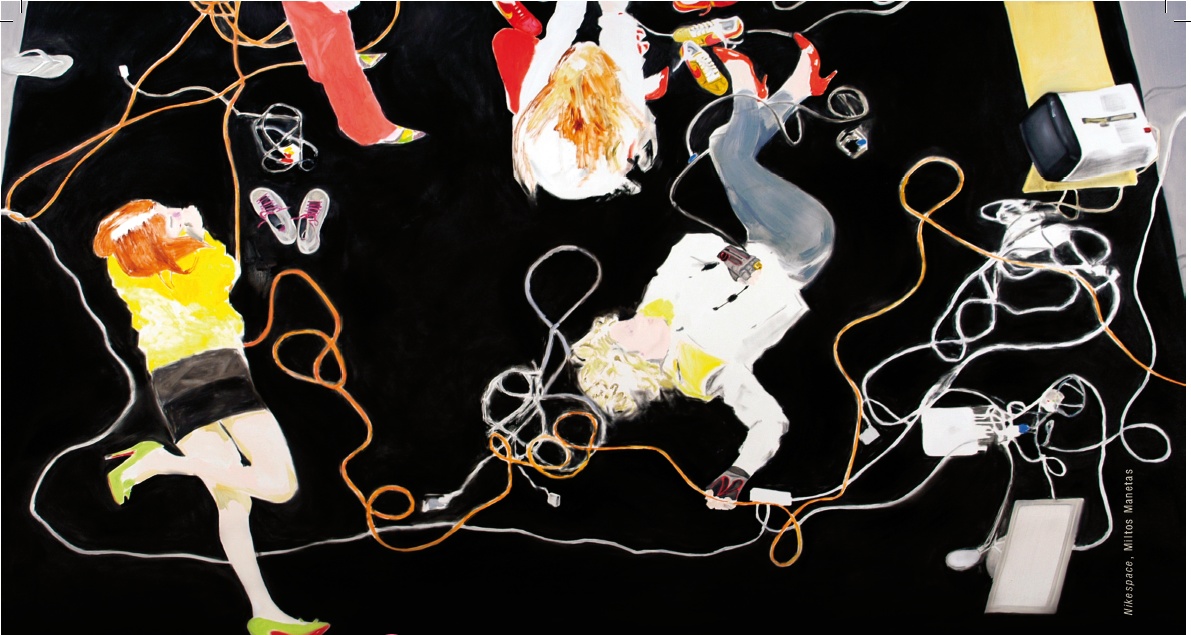 “The El Greco of the Geeks”

Miltos Manetas, “The El Greco of Geekdom” as the Guardian’s journalist Steve Shipside named him, is an artist and theorist whose work explores the representation and the aesthetics of the information society.

Manetas is the Founder of the Art Movement Neen, a pioneer of Machinima[1]  and an instigator of Internet Art.

Born (in 1964 in Athens) and grown up in Greece, Manetas defines himself as a “Southerner”. Her mother was working at the central phone station connecting phone calls as a phone operator and his father was repairing the electric circuits at the same building. He lived in a “PC universe”, in a “PreComputers and PreContermporary art” environment, as he says, and he remembers himself feeling “excited, bored and happy”.

He left Greece in 1985 at the age of 20. At that time, it was the “new Greece” that started to get born, the Greece of the “new south” populated by “MAC”, (Man After Computers / Man After Contemporary Art). Trying to escape from his Family and more precisely from the concept of the Family and the obligation to have one, he went to Milan where he studied Fine Arts.

In 1995 he started painted. He was then included in Traffic show, and later in Bourriaud’s book Relational Aesthetics. But at this time, Manetas decided to change his approach to art. He abandoned performance, objects and site specific installations and he began making paintings about computer technology, exploring the possibilities of creating art by using video games and the Internet. “Having to deliver works for four final exhibitions that were supposed to be my last, I bought four canvases and painted the same picture on all of them. These first paintings (Sad Tree, 1995) were successful and I continued painting first laptops and digital cameras and later all kinds of hardware. At that point, I didn’t know how to use computers, I learned quickly and I became “a screen junkie”. While I was doing my paintings, I started using digital media to portray the digital world”.

In 1996, Manetas moved to New York City and began working on a series of video game-related artworks, using Lara Croft and Mario as “ready-made” characters. Both works were exhibited at the Institute of Contemporary Arts, in the exhibition entitled Made in Italy. It was at that occasion that The Guardian published an article on Manetas calling him the “El Greco of the Geeks”.

In Super Mario Sleeping, a video from 1998, Mario sleeps under a tree, while in Flames, a 1997 video, Lara Croft is constantly getting hurt.

Manetas was one of the first artists to both recognize and celebrate the influence of videogaming on contemporary art, on visual culture tout court, and on our psyche. His epiphany spawned a series of game-based artworks for different media (painting, videos, installations) and therefore he is a true pioneer of Game Art. His “Videos after Video Game (1996-2006)” series is considered the first example of Machinima. “In the same way that the impressionists focused on nature, computer landscape became for my generation the most important subject matter. Of course, video games were around a long time ago, but it was only during late 1990’s that we realized that they were part of that computer landscape, and not just yet another bit of visual excrement that was dropping out from television”, Miltos explains.

In 1999, Manetas leaves NYC and enjoys being an “orphan”. Having moved again, this time from the Far North of New York to the extreme West of Los Angeles, he tried and he succeeded to distance himself even from that second happy family of his: the Art World.
”I started looking for new friends, other orphans, who were -like myself-under the existential spell of computing. That’s how the Electronic Orphanage in LA’s Chinatown was born and that’s how the art movement Neen was initiated. But the Art World started expanding west, and so I left Los Angeles to diffuse Neen to the World”. Manetas was compulsively traveling all over the world and displayed exhibitions.

Another important show was Elysian Fields at Centre Georges Pompidou in Paris, curated by the Purple Institute. In spring of 2000, Manetas presented the new name, Neen, to an exhibition-performance held at the Gagosian Gallery in New York City.  Manetas says about “neen”: “Neen in Greek means “exactly now”; the absolut present.
It is the latin “Nunc” (from “futurum nunc est,” in Greek το “μελλει ειναι νυν” (what’s going to be is now).  In numbers, NEEN is 5555. The keywords for the number 5 are: activity, influence, courage, motivation, change freedom, curiosity, telepathy, experience, the intellect.

But more importantly, Neen is an animated word. It is a palindrome. It is a mirror-word: you can read it backwards and upside-down. NEƎИ”

Having developed the technique of “Invisible Painting”-a very personal and simple manner to keep doing his art while he was traveling, he was going around shamelessly, as he says, until he met Catalina and immediately their “genes start talking to each other so loudly” that they decided “to co-produce a baby”. He started desiring “to become a local again”.

He explains «Invisible art» like this: “There was a change for me after I had a recent accident in 2010, when I went down 40 meters from the top of a rock on my back with a little tree, finally saving my life. After a month of immobility in the hospital, I returned to that same place where I had the accident and I rented a little house there. Waiting to recover completely, I had my colors and canvasses brought there but I couldn’t paint: regular painting just didn’t seem a good idea anymore.
Finally, one day that I took a brush and without any color on it, I started “painting” over the landscape. A few days after my “discovery”; I kept my Blackberry on my left hand, I start filming whatever it was that I was painting. A Blackberry and a brush was now all that I needed for a studio. That’s how the BLACKBERRY PAINTINGS were born and from that moment, I decided to continue my life by painting it at the same time”.

Meanwhile, in 2007, London’s Hayward Gallery commissioned Manetas to do a special project around the idea of Existential Computing, a new term he was using for his practice. During this show, Manetas met Malcolm McLaren and they participated together in a show that artist Stefan Bruggemann curated at the I-20 gallery in New York City. Manetas’ work for this exhibition was a piece commissioned previously by Newcastle’s Baltic Centre for Contemporary Art and the British magazine Dazed & Confused for the Dazed & Confused versus Andy Warhol exhibition. It consisted solely of a URL written on the wall: “http://www.ThankYouAndyWarhol.com.”

Malcolm McLaren (1946-2010) became a friend and a master to Manetas. He followed his advice “to find himself a private place”.

Manetas chose to settle down with Catalina in Rome.  ”The reason that I picked Rome instead of Los Angeles or Nairobi, was because Enzo Cucchi had recently told me that “Rome is not one city but many, at least seven, one over the other, all still very active”. Always amazed by Parallel Worlds, I went there, but already from my first months there, I discovered that there is something else that was making from Rome a very special city and that had to do exactly with the concept of Middle South.

For centuries now, Rome is the border between South and North and I suspect that the city actually owns at least a part of its riches to the job it does dividing the two”, Manetas explains.

“So when it came to us, having decided to “Start Up” our daughter there, it was like a statement to me. Indeed, we called her Alpha, which as a symbol and term, is used to refer to or describe the first or most significant occurrence of something”. Her daughter, gave him a new inspiration: ”In my pictures, I try to re-invent family photography. I am doing that by projecting the pictures that I take from Alpha, back to the room where I photographed her or to some other place. Then I am re-photographing them. Decontextualizing the pictures that way helps me to think of the three of us not as a family but as MAC (Miltos/Alpha/Catalina): a network”.

In 2009 he started the Internet Pavilion of the Venice Biennial and from 2011 he directs the MACROeo (electronicOrphanage at the MACRO Musem in Rome).

According to Lev Manovich, Manetas is a true “painter of information life”, “the only contemporary painter who made this reality the focus on his paintings”.

The site of the artist: http://cargocollective.com/manetas